We do a large element of LL business. That part will have to stay with RM - they will become carrier of last resort for us

And of course, this is the big problem for the sellers of greetings cards, S&L stuff et al; everybody is stuck with RM (or whatever will be left of it). Whatever happens, redundancies will happen, modernisation will have to happen; it’s just a case of who runs the business, the present lot or this Private Equity Group that the union reckons are coming in. At the end of the day, somebody will have to pay for all of this and it will be sellers who survive, paying higher prices and the blood, sweat and tears of those who will fall.

It is all part of the politics.

Of course it is, this is the altar of Thatcher v Scargill Part 2, only this time it’s Thompson v Ward and the sellers here are the sacrifices (amongst others). Thompson was so smug on the BBC this morning; you could just tell what he was thinking before he even uttered a word. I just wonder if Amazon could offer a similar delivery service for LL via their logistics arm, at a comparable price. That would make things interesting?

What was also interesting this morning was a separate survey had been done on the top 5 couriers in the UK. None of them scored more than 3 out of 5, every one of them had issues themselves so it’s not as if sellers can simply jump onto a good courier either.

is DHL included in the survey?

A very big retailer that I shop often is now using DHL parcels. (they have always used RM tracked 24 for 100% of their deliveries, but abruptly switched to DHL following the latest black friday strike).

Based on my experience, DHL/Deutsche Post is extremely efficient, and always a pleasure to deal with. They might be taking over a very large market share once this whole thing is over.

is DHL included in the survey?

I presume so (it was on BBC this morning after the news). It said the top 5 so I would assume DHL is in the top 5. I have never had an issue with DHL or UPS in the past and UPS for FBA have been spot on for me. That said, RM and EVRI have been fine overall, but Yodel poor. Each seller will have their own experience. The big problem with this strike is that if you do parcels, you have a lot of options; if you do letters / LL their are no options, so you’re stuffed like a turkey.

This was a Which survey from the summer…and Amazon are top. 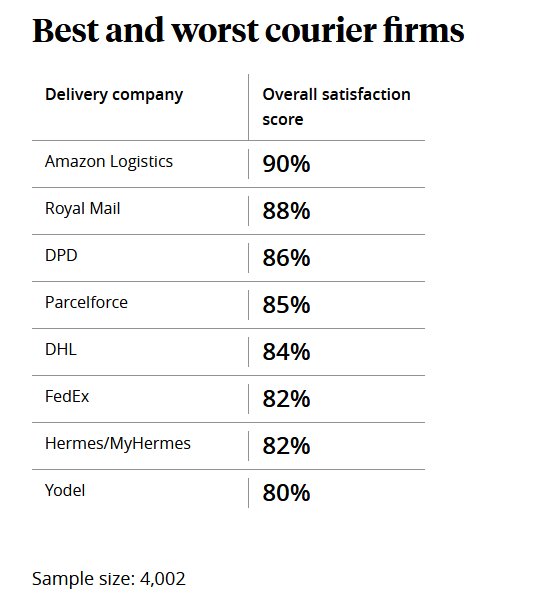 … going by these results anyone would think customers don’t want their parcels thrown over a fence or stuffed in a hedge.

If they still have Evri listed as Hermes, that’s probably either from the start of the year, or before this year, so it may be out of date.

I can’t imagine much has changed, mind.

Ironically I’ve lost count of the number of items that Evri have ‘lost’ so far this year. Even items sent as replacements for previous lost items. I need something to scream in to!

Ironically I’ve lost count of the number of items that Evri have ‘lost’ so far this year.

Since I started using them in August I have only had one lost parcel.

Although at the moment I have several which have not had a scan past the sending depot or have reached their final delivery depot to be delayed for several days. So I think that may increase…they seem under a lot of pressure.

He refused to say if he was at any negotiating meetings. That to me says that he wasn’t. Why would you not say otherwise? All he would say was he was “involved”. That isn’t the same as being in “the room” . It’s like being a little dictator and issuing orders from your bunker to your generals. You are involved in “events” but you’re not there “at the event” . If you don’t turn out, people believe you’re being disingenuous, which of course, he is, because he has an agenda.

I think too much is being made (primarily by the CWU) of the CEO not attending the negotiation on a daily basis.

There would likely to be a team which reports directly to him which would have been doing the talks. This is likely to be the same in most disputes and not just RM. Once potential deals are discussed they would then be fed back to him for comment.

I don’t see anything unusual in all of this and the CWU have just used his non attendance for other reasons. I suspect it is part of their desire to see him replaced and anything which looks bad on him will be put out to the wider public.

I think both sides are equally guilty of not agreeing on a solution. It makes it worse that there have been negative comments given out by both sides rather than trying to find the common ground and building on it.

Since I started using them in August I have only had one lost parcel.

Only been using them since the strikes started and it’s the postable ones (and Scotland) that’s the main issue (got 4 current claims with a further 3 I’m just about to do - and 2 are resends - plus more I’m getting concerned about).

I’ve even got hold of someone at Evri to ask if there is a specific problem here. No answer to that. Just the, please describe everything about your parcels, etc… Em, you have the order details - size, weight, contents, etc! And I’ve repeatedly sent the same images of what they look like.

I should maybe worry less. Just want one Xmas that’s not chaos and when I see items that have been collected over a week ago with no further tracking updates, I get worried - especially if they’re just going 20/30 minutes away. I could have hand delivered!

Had enough for now - need to go do a food shop before I starve!

I must say im impressed so far with Evri, I guess it depends which area are in, but then compared to royal fail over recent months, just having orders actually delivered is a massive improvement!

98% of our RM48 orders placed between 24th - 28th November have yet to be delivered. Customers are being brutally unforgiving. We are getting around 50 where’s my item messages per day across all platforms…fun times.

Evri are the winners here. Royal Mail are failing, Evri briefed to make sure they step up their game and impress. People who have switched from Royal Mail to Evri quite like it and don’t go back.
This is the end for Royal Mail.

This is the end for Royal Mail.

I don’t think so

Even if there are huge redundancies and the union caves in (which it won’t), RM will still be here and still in a very large size. Just because there is industrial action in a business, doesn’t mean the end of the business. It’s an industrial argument, which will get settled, by some form of compromise (eventually).

Hermes (EVRI) and Yodel were the most diabolical couriers on the planet (if you went by some of the threads here over the years). Are they still here? Yes they are and EVRI have just opened the biggest sorting hub in Europe, near Barnsley.

Regardless of service (or perceived service) a large proportion of people are always swayed by price, which means there will always be a market, even for the chaff. And the end of Royal Mail would signal the end of thousands of businesses here who totally rely on RM because their business model is letters / large letters. There is no cost effective alternative. You can’t send a greetings card that costs £1 and charge £3 for standard postage. That would be the alternative.

RM will still be here when you and I have long since began to push up the daisies (and at nearly 60, my daisies might need less pushing than yours)

Evri are the winners here

My own experience of Evri and also a long thread on Social Media suggests Evri are struggling at the moment.

In the last week I am seeing a number of parcels hitting the delivery depot and then being hit by a bad weather/road delay and not moving for days. There are also a couple that haven’t had a scan since the sorting depot.

I think I’ll just follow @The_Little_Shop lead, ie no point in replying to the points you make cos you’ll just delete your post tomorrow and it’ll look like I’m talking to myself (again)

I’ve just done a check on some of my Royal Mail orders I posted on Monday this week and none have been delivered. A friend of mine works for RM and says their depot can’t take any more mail (apart from the obvious Special’s). I was expecting a collection tomorrow (Friday 2nd Dec) but I don’t think it’s going to happen, or of so, it’ll only be Special’s collected. Not a good situation.

Anyone can sign up to the unofficial postal workers forum if you’re curious as to what’s going on from their perspective.

However, I should forewarn that it’s pretty disheartening.

I went there because I’m against the strikes, but I wanted to get ‘their side’ of the story to keep a balanced view point, thinking I’d probably find some redemption I hadn’t considered. I can only describe it as worse than I thought, disappointing, and sad.

There are some real nasty pieces of work on that forum. Many are just looking for bigger redundancy payouts as they were planning to quit anyway. Others have made it a point to ‘quit slowly’, by sabotaging on the days they are in.

One went on a tirade about they would never ever scan the 24/48 large letters because it was ridiculous to ask them to do so (this appeared to be a popular opinion).

A few mentions of strike breakers with young families who were penniless and forced to go back to work, with a long list of nasty expletives disparaging them for choosing their wives and young children over the union.

Complete disregard for the public and small businesses. Lots of posts saying things like 'our military aren’t getting cards/letters, as if it were our fault!"- you know - like when an abuser says “look what you made me do”.

I thought I was being unfair with my negative opinion, but good grief, it’s actually worse than I thought. The majority are militants with no intention of any deal besides getting a nice big payout for quitting, and the public is just canon fodder for them to make some quick redundancy cash.

There is no deal to be had, because a deal is not what they’re looking for.

oh, …and finally, thanks for your reply… you just couldn’t resist!!!..could you???

Nothing to do with “resisting”; I (like several others here) don’t see the point in replying to the messages you post, knowing that (by your own admission), you delete your messages after 48 hours. I’m quite happy to converse but if your message is gone, mine is just isolated and doesn’t make any sense to anybody.

People who have switched from Royal Mail to Evri quite like it and don’t go back.

That’s not been what I’ve been seeing. I’ve seen quite a lot of people frustrated with the service they’ve gotten from Evri. In particular, I’ve seen people complaining about claiming with Evri when the parcel is lost or misdelivered, or delivered damaged.

Apparently it’s the equivalent of trying to get Seller Support to give a sensible response on first response.